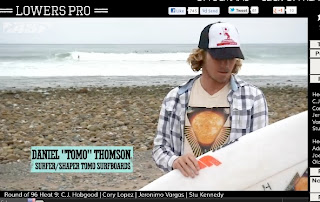 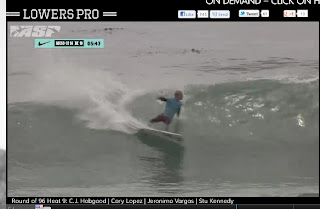 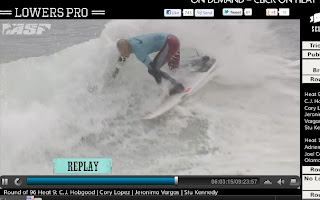 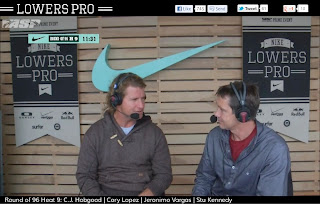 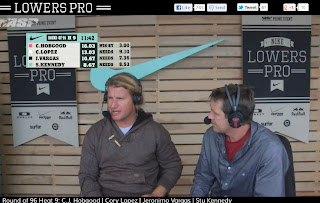 FUELIE: “Theres Occy… coming up in heat 21,  but he’s also going to join us in the commentary box for heat 9 as well. So we have legends in the house.,,so there he is, he’s getting ready to say hi to everybody out there in webland. Looks like Occy’s got a paparazzi cam with him… he’s been absolutely followed all the way in here, that’s what happens when you’re an icon of the sport. When we come back we’re going to go to heat number 9 and a special commentary guest Mark Occillupo so please stay with us…well welcome back to Lower Trestles and the 2012 Nike Lowers Pro…now we’ve got some special guests in the water, as you can see our local dolphins having a bit of a play there coming up and saying hi there to Cory Lopez there in the white, and we also have a very special guest in the commentary booth, 1999 world champion and recently 3rd place at the Margaret River prime event, Mark Occhilupo. Occy, welcome.”

OCCY: “Thanks Mark, thanks mate, its great to be back in southern California, kinda on my way to Brazil for the next CT event, the Billabong, I’m gonna be doing some commentating there so I thought why not stop in here and have a go at Trestles, I mean the waves are good and I’m pretty excited.

FUELIE: “Well, we’re excited because we love to see you performing out here and we’re looking forward to that…this is an interesting heat because you’ve got the two experienced guys (C.J. Hobgood, Cory Lopez) up against Stuey Kennedy of Australia and Jeronimo Vargas of Brazil….and lets take a look at Jeronimo Vegas just going left here…”

OCCY: “yeah, I haven’t seen a lot of him but what a name, I mean Jeronimo, thats what you’d be saying if you went to Las Vegas now wouldn’t ya?! But it looks like he surfs good…”

FUELIE: “here we go we’ve got someone up on the left, it is Stuey Kennedy…”

OCCY: “and wow that was a nice snap, but it looks like he’s riding a board with no nose…”

FUELIE: “did you notice his board? It looks like a kite board.”

FUELIE “no, that’s actually his board”

OCCY: “That did look good though, but he’s taken his nose completely off and I’d like to…here goes Cory…but interesting choice of equipment, I have not seen Stuey ride this thing…wow look at this… it looks like he got it straight out of a wake board factory!”

OCCY: “a batnose?! Kelly Slater would probably like have a look at that, a closer look…but aw y’know, I mean, I dunno…looks like its working…but it kinda surprised me! (laughs)”

FUELIE “but you’re not sure?”

FUELIE: “Occy is not sure about this wake/kite/surfboard that Stuey Kennedy is riding!…but great surfing (by Stuey)”

OCCY: “yeah great surfing, but…I mean the tail must be just a normal regular tail because he looks powerful, and uh, y’know, he’s just decided to cut the nose off. It must be good for airs I guess? Not that I’m an air guy… but aw, very interesting choice of equipment.”

FUELIE: “Well, a lot of progression goes down here, not just in surfing but also in board design. So we’ve got a little piece here on this very unique board of Stuart Kennedy’s”

Cut to Daniel Thomson describing the board:

DANIEL: ‘This board is 5’1″, 17.25, 2.12.5″…the width in the nose and the tail are all balanced from a central wide point…and the outline is super parallel so its gonna have very little resistance going through the water. So it gets up and planes at a much higher speed, its got much less drag, less resistance, and its got a much higher top end potential. You’ve got all the fundamentals of really traditional power surfing, and the new school…the idea is to have a board that can do everything. Hard rail power surfing, radical surfing, and not compromise with anything. We were trying to improve on the designs that are currently with us now.”

FUELIE: “So Occy, you gonna get one of those in your quiver/”

OCCY: “Aww haha ha, he sounded pretty convincing, I know he talked Stuey into it and I can see why but…. I don’t think so. I mean its good to try new boards like that and it seems like its good off the tail, but , what about on the eye? Y’know it looks like there’s something missing there.”

FUELIE: “then again, that’s what people said about Simon Anderson when he rolled out the thruster…but talk us through this next wave of Stueys..”

OCCY: “Well, he’s gonna prove me wrong here probably. (Stu rides a fat, soft right, digs rail on a cutback) He just does dig a little rail there, and it looks like the nose actually caught there, so y’know, it didn’t work in that actual situation. You’d really want to be surfing off the tail I guess on a board like that. Its my thoughts on it. But see, the nose kinda caught going through the lip there too…and uh, on the cutback it caught again, so , aw , yeah you’d wanna be on the tail…but its just my opinion.”

FUELIE: “Well it’s a great era of surfboard design right now, there’s more styles of boards being ridden right now than ever in the history of the sport.

OCCY: “There is, I mean, Kelly’s kinda rode that, he’s gone a lot smaller and wider in the nose,…y’know …I’ve never liked riding a board like that…lets watch that wave of Stuey again…just getting caught up there through the lip, kinda slowed him down a bit, but it was good turn…yeah but aw…I don’t really like going shorter and wider, cause I’m pretty old school and I like the power carve and all that, but when I had my first surf out here yesterday I rode my regular board and it didn’t feel as good as I thought it would, so I actually went down to a shorter and a little wider board and it felt really good. So I’m conforming. But I mean its just changing so much…”

OCCY: ‘here we go… and it’s a nice snap, that’s where the board works, I mean, there’s no doubt about that…and look at that, really nice, y’know it fits in those tight pockets nicely, but probably not giving him as much power, because this guy, he’s a powerful surfer…the shaper really had to talk him into this change of equipment I think, but can he get through the heat? …a little air reverse there…well he might (get through) if surfs like that.”

OCCY: “Here we go, this is another replay of Stuey and this wave had a little bit of foam on it, I’m guessing it could be in the 5’s, he got some kind of a 4 for his first ride, this will probably be a little better, but you at home might be thinking the same thing I am ha ha: “why is riding that board?” …but the heats not over yet.”

FUELIE: “and he’s certainly surfing very well but….the guys that have a lot of experience on the world tour and who’ve adapted their surfing to the criteria are out in front. (cj just got 8.33)”

OCCY: “yeah on paper it looked like it was going to go that way, Cory and CJ probably wouldn’t be thinking about the other two guys in this heat, they’ve had a lot of heats together and they’re just kind of spurring each other on at the moment. They’ve got pretty solid positions there because Stuey needs an 8.53 …but CJ and Cory seem like they could split the peak for the rest of the heat and take these guys out of the equation.”

(Fuelie and Occy talk about California and Tom Curren)

Cut to piece on Curren at Lowers

OCCY- “What is happening (with Curren)…where is he?”

FUELIE: “ He won an ISA masters last year, so he’s around, still surfing…

(Note: 3 months ago Tom Curren beat Dane Reynolds in an early round heat of the Rincon Classic riding a board Daniel made with the same dimensions as Stu’s)

OCCY: “very unique Fuelie, and look at that nice driving cutback, actually now its starting to look a bit better, see him get on the back there? He pulled his foot back off the nose there so he could get further on the back. It looks really lively, this board, for sure. But I’d love to see him get in the air though, and see what it looks like.  I’m sure that’s what mainly this board is made for. I know his shaper said it planes out really quick, we can tell that. I’d like to see it in the air. I reckon that might be his best score so far. “

FUELIE: “Good wave…he needs a 9.87 though, he’s coming from behind….Lets take a look at the split screen here, and we can see the adjustments being made on the board. “

OCCY: “Yeah he just seems like he needs to bring his feet back more on that board…its his front foot that I’m talking about obviously …that board …his second cutback? The nose didn’t grab and look how much extension he got, really fitting in that little pocket there Fuelie, quite nicely…but I dunno if I’d ride one’.

FUELIE: “ I’d love to have a go on that board. That’d be fun, that’d be a lot of fun I think, but it does look like as you said it’d be good to see it in the air. ……Stuey Kennedy, he’s looking for a big score here..”

OCCY: “well he is…what did he get on his last wave? It was 5.87 so he needs an 8.5 and aw…he’s surfing really nicely on those tight little sections…c’mon Stuey get in the air for us…(Stu does a little air reverse) there we go…see it did work in the air…but he doesn’t like it though… (Stu slaps the water as the horn blows and the heat ends, not getting the score he needs. His two rights were soft with no wall) don’t know if it’s the board or the actual heat…dunno if we’re gonna see him on that board in the future but its good to see people trying different equipment.”

FUELIE: “Absolutely. It’s what progression is all about and Stuey Kennedy definitely innovating with his equipment there. So that is the end of heat 9. There we can see that board…it does look a lot like a kite board or a wake board…”

OCCY: “It does aye, look at those little grooves in the nose too, just to help that board get through the water because its so wide in nose…”